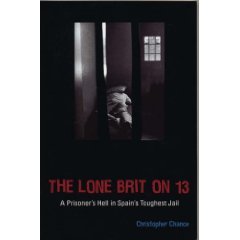 The Lone Brit on 13 is a gripping true story of violence, degradation and adventure penned in the confines of a grim Malaga prison cell. Imprisoned for almost two years for drug-smuggling, the lone Brit on Wing 13, Chance, reveals the horrors he experienced among cut-throat villains and screws in the netherworld of the Spanish prison system.

Chance takes to writing in his dank prison cell in an attempt to escape his surroundings, and recalls various episodes in his life: his time serving as a soldier in Thailand and Malaysia; his involvement with the 3 Para snatch-squad in the 1970s Belfast; and his subsequent descent into drug dealing and trafficking, which culminated in a high-speed boat chase and his imprisonment in a top-security Spanish jail.

While inside, Chance fought his way to the surface of a cesspool of iniquitous scumbags using his fists: the only effective means of being understood in an environment of desecrated morality and non-existent integrity. With predators lurking everywhere, Chance had to be constantly on guard, and in order to survive he had to be mentally prepared to inflict the necessary violent retribution on any would-be attacker or racist thug.

As the sole British inmate, Chance was a prime target for the intimidating Spanish hardmen who thrived on cruelty and treachery. But his martial arts skills and Samurai philosophy proved to be more than a match for the aggressors. Once a respected and successful businessman admired by his peers – he had operated his own martial arts business in Spain before being jailed – Chance took one wrong turn in life and lost everything except the love and support of his loyal wife.

On eventually gaining his freedom, Chance’s goal was to return to the straight-and-narrow and endeavour to bring happiness back into the lives of his family.

The Lone Brit on 13 is the genuine account of an adrenalin-addicted Englishman single-handedly defeating intimidation, racism and potential drug addiction in the bleak surroundings of a Spanish jail. It is a shocking and controversial read that will offend, amuse and ultimately entertain with its unflinching honesty and brutal realism.