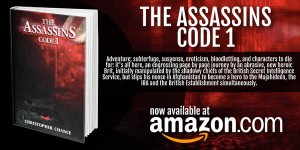 Adventure; subterfuge, suspense, eroticism, bloodletting, and characters to die for: it’s all here, an engrossing page by page journey by an abrasive, new heroic Brit, initially manipulated by the shadowy chiefs of the British Secret Intelligence Service, but slips his noose in Afghanistan to become a hero to the Mujahideen, the IRA and the British Establishment simultaneously.

The webs of intrigue stretch from Berlin to the Hindu Kush and across to Ireland where the plot thickens and the heroines are the hidden lionesses in the jungle of merciless terrorism. Chance’s vital pen takes us through the breeding grounds of undercover intelligence operators to mix with terrorists; arms and drug dealers, murderous mountain men and the cold, cunning assassins: men and women dedicated to their cause.

This is the authentic, ruthless pen of the professional soldier: the anti-interrogation instructor, the Small Arms School weapons instructor, the Black Belt martial arts teacher and convicted high seas smuggler writing the revelatory compelling account of action during obscure IRA activity spanning the early seventies and the coming of age of the narco-terrorists when the author himself was an Intelligence Operator in Northern Ireland.